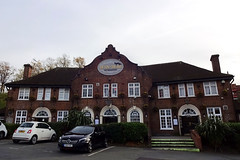 Wetherspoons pub near Denmark Hill Station, in the southern part of Camberwell.

It's housed in a large, detached building at the top of a hill, and looks quite impressive from the outside. It has a large beer garden with play area out the back, and at the front is a car park, beyond which is another large beer garden with picnic benches in the centre and several mature trees around the edges. Inside, the space wraps around a central bar, with a low ceiling and many wooden room dividers making it feel somewhat smaller than it really is.

Kake visited on a Wednesday afternoon in November 2017. There were a fair few people in when I arrived around 2:30pm, though still plenty of choice of seats. No music was playing, as is usual for Wetherspoons.

Although it has at least 16 handpumps, there were only 7 real ales on, most of them fairly unexciting: Wychwood Hobgoblin, Ruddles Best, Abbot Ale, Sharp's Doom Bar, London Pride, Wickwar Sun Downer, and Adnams Wild Hop. (Portobello Star and APA were marked as "coming soon".) A pint of lime and soda was 80p, and came with two browning-round-the-edges slices of lime.

Food is served all day from a chain-wide menu, including breakfast. They have free WiFi via The Cloud (requires registration).

Accessibility: Step-free access via the left-hand entrance. There's an accessible toilet on the level, and access to the ladies' is level too (gents' not checked).