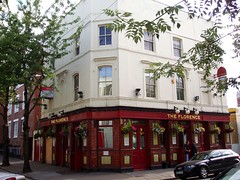 The Florence was a fairly traditional pub just off Upper Street, in Canonbury. According to the Oct/Nov 2014 London Drinker, it closed in June 2013 and an application for conversion to residential has been approved.

A fairly traditional pub just off Upper Street, in Canonbury.

Given the range of bars and drinking holes available on Upper Street, this one makes for a pleasant change. It has clearly benefited from some refurbishment -- there is an odd assortment of leather couches, four-person tables, smaller ones with stools, and a larger, darker, bookable area behind the bar -- without losing sight of its place as a pleasant single-room boozer.

There are two handpulls offering Bass and Adnam's Bitter, which appear to be regulars, as well as decent draught lagers, and several wines on display. Bass was perfectly well kept and sold for £2.90/pint (as of October 2008).

On a Thursday evening in October 2008, there was just one chap on the bar, but he was friendly and our group found the place to be perfectly good. It never really became unpleasantly crowded, and there was always space available for the few hours we were there.