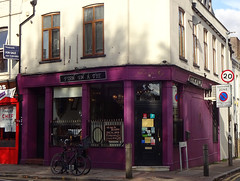 Distinctively-named Mediterranean restaurant in Battersea, just around the corner from Clapham Junction Station.

It's spread over two and a half levels, with seats for around 45 on the main floor plus more in the basement. The decor is very 'bistro', with exposed brickwork and large mirrors in ornate gilt frames photo. Tables are covered in white paper tablecloths, and chairs are the wooden type from churches with a pocket on the back to put your hymn book in. Lighting is dim, supplied by a combination of chandelier-style fixtures, concealed uplighting, and small candles flickering on the tables.

It's rather cosy, as they don't half pack the customers in, and when Robbie visited on a Tuesday night in late 2006 it was absolutely packed. When Kake visited on a Thursday evening in October 2018, I was the first evening customer on arriving at 5:45pm, but two more turned up shortly after, and by 6:15 there were four of us. Music was playing, not too loud, and quite a varied selection of cover versions.

On Robbie's 2006 visit, starters included asparagus wrapped in salmon, potato wedges, pasta, crab in choux pastry, and risotto marinara, while mains included roast knuckle of lamb, fillet of sea bass, ostrich steak and the 'Fish in a Tie plate' and desserts included the 'Black Tulip' — a crispy pancake with various fruit and things inside.

Robbie had the wild risotto marinara to start, and it was almost too big for an appetiser. It included mussels, clams, squid, a very large prawn and octopus in a tasty tomato and chilli sauce with perfectly cooked rice. Highly recommended, though it is about the most expensive thing on the starters menu.

My main was the Fish in a Tie plate, which was another seafood medley, similar to the above but with larger bits of everything, plus salmon and another fish and more prawn, all in a white wine, cream and ginger sauce. My dessert was profiteroles, which were very large and sadly slightly over-baked, but very generously filled with cream. I think the chocolate was sauce from a bottle sadly. It was the only minor disappointment of an otherwise tasty evening.

The service was perfect and prompt, so we didn't resent them adding on the 10% service charge for us. We even left more because we were so impressed. Overall, three courses with a couple of glasses of the house wine came out at about £20-£25 per head including service and a bit extra on the tip.

In October 2018, Kake chose the set menu (£13 for two courses) and started with beef carpaccio photo. This had a decent flavour, was cut properly thinly, and was served chilled but not overly cold. It came with a few shavings of slightly over-hard parmesan, a huge mound of decent enough salad leaves, and a drizzled dressing that left me on the fence over whether it was house-made or from a bottle.

My main was grilled salmon with tomato sauce and citrus hollandaise photo; I asked for this to be done rare, and it did indeed arrive rare. They could perhaps have got a bit more of a crust on the outside, but this is difficult when you're cooking it rare. The tomato sauce was just the right amount — not overwhelming — and the hollandaise was fine. The accompanying vegetables (carrots, green beans, potatoes) were cooked plainly but competently, with the green beans retaining a nice crunch.

Service was efficient but a little detached. No service charge was added to the bill this time.

Robbie's verdict: Highly recommended, especially if you like fish.

Accessibility: One step and then three more steps (all without handrail) to get in to the ground floor seating. The toilets are in the basement, down half a flight of stairs with a hard-to-grasp handrail.