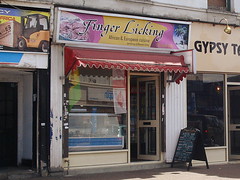 Finger Licking was a small Ghanaian restaurant in Croydon, just behind West Croydon Station. It has now closed, and the building it was in has been demolished.

Kake has visited several times now for both eat-in and takeaway, most recently in December 2019. On my first few visits, the staff were reluctant to let me order some of the dishes since they weren't sure a non-African person would like them, but after they'd seen me a few times they were quite happy to let me try anything I liked.