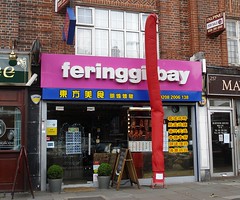 Feringgi Bay was a Chinese-Malaysian restaurant in Colindale, the new home of the Oriental Garden stall which used to be in Oriental City. It has now closed. As of mid-2015 the premises are occupied by a Sichuan restaurant called Lily's.

Chinese-Malaysian restaurant in Colindale, the new home of the Oriental Garden stall which used to be in Oriental City. They also do takeaway and delivery. Note that they're closed on Wednesdays.

Note: By mid-2014 Feringgi Bay had changed name to Urban Kitchen, and now has possibly closed.

It's not large; there's seating for about 36 people at cafe-style tables with shiny metallic tops and semicircular red place mats. The floor is covered with large shiny tiles, and there are a couple of flatscreens on the wall.

The menu is quite extensive, partly because it offers the usual "British Chinese restaurant" stuff (crispy seaweed, sesame prawn toast, meat X in sauce Y) as well as a Chef's Special section including "Malaysia, Singapore, Thai & Vietnamese Speciality" with dishes such as roti canai, kerabu salad, nasi lemak, curry laksa, and Hainanese chicken rice. (The Vietnamese dishes seem to be limited to spring rolls and summer rolls.) They're licensed, but the options are limited to three brands of beer, including Tsing Tao. They also have a huge soft drinks menu, illustrated by photos of the brightly-coloured fruity concoctions on offer.

Kake first visited on a Friday late lunchtime in September 2009. The flatscreens were showing some kind of parade, with the sound off, and music was playing quietly. There were a few other customers, including a group of six who seemed to have booked in advance, but there was plenty of room and I got my choice of table. A bowl of prawn crackers was brought shortly after I sat down, though I would have preferred the dish of pickles that the chap on the table next to me got instead.

I had the Penang char kway teow (£6.80) photo. The waitress warned me that it contained Chinese sausage and was quite spicy; neither of these is a problem as far as I'm concerned. It was tasty enough, and correctly served on a piece of banana leaf (although this wasn't evident until I ate enough to uncover it). It had the right level of spice for me, and there was just enough oil used to stop the noodles clumping without being overly greasy. I liked the crisply-fried onions scattered on top, but I failed to detect any of the promised sausage. The prawns were nice and big, with a decent texture. Fish cake slices were present but not in overwhelming numbers. Squid was alas a bit chewy. Overall, it was fine without being something I'd specifically come back for.

Tap water was brought promptly when I asked for it (at room temperature with no ice, though this was fine as it wasn't a particularly warm day), and topped up later without me having to ask. Service was friendly, though they seemed to have a knack for asking me things when I had my mouth full of squid.

Kake visited again on a Tuesday evening in October 2009, in the company of bob and Katie. Again, there was no problem finding us a table. Katie is vegan, so we had to be a little careful about choosing our shared starters; we went for tofu satay (£4.50) photo, kerabu (mango salad, £4.50 — order this without the ikan bilis/dried anchovies if you want the vegetarian version) photo, and deep-fried vegetarian king prawns (£3.90) photo. The tofu used in the satay was only OK, but the satay sauce was good, complex and tasty. The kerabu was disappointing; the dressing was very unbalanced, all acid and nothing else. Also, the mango was unpeeled (which is fine), but was cut so thickly that the bitterness of the skin was overwhelming. The vegetarian king prawns were a surprise hit, though; a well-seasoned filling of tasty mushrooms and things in a light, crispy wrapper of beancurd skin.

Katie's main of salt-and-pepper tofu photo had a lovely melting interior and a well-flavoured coating. bob's beef tendon and brisket on rice photo was also well-flavoured, and nicely glutinous. Kake's nasi lemak beef rendang (£6.30) photo was good, too; tender beef in a thick, rich sauce, plenty of flavour, and a decent but not overwhelming level of chilli. A side dish of okra belacan (£4.80) photo was well-executed, with plenty of flavour from the belacan and no stringiness or sliminess in the okra at all.

Service was fine, but a bit hovery.

Kake's verdict: I'd certainly come back if I was in the area. I'd say I'd come back regardless, but I live in South London and Sedap is closer! I'd happily order the nasi lemak beef rendang again, too.

Accessibility: Shallow step up to get in. On one level once you're in. The single toilet cubicle isn't overly large.