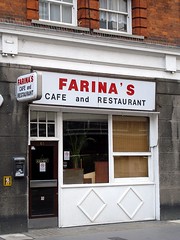 Farina's was a classic cafe on Leather Lane in Farringdon. It has now closed. According to Google Street View, as of July 2012 the premises were occupied by a cafe and sandwich bar called Tony's Cafe.

Farina's is a classic cafe on Leather Lane in Farringdon.

It serves breakfasts and lunches, including an all-day breakfast with a free choice of four, five or six items from a list of about ten, including the usuals as well as black pudding (which can be hard to find).

(It appears to be known to yell.co.uk as "Farina" and to royalmail.com as "Farino"; however, as seen on this photo, the name on the frontage is definitely "Farina's".)