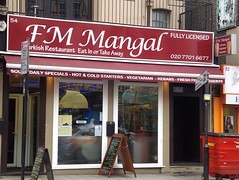 They specialise in grilled meats, cooked on the open charcoal grill (ocakbasi).

Entry is into a small lobby area (where takeaways can be ordered and waited for); small flights of stairs up and down lead from here to the restaurant seating.

secretlondon visited one early evening in June 2009. I think I was the only customer. There was Turkish pop music playing.

I had hot mixed meze (£7) photo which was sold as a starter. It came with some flat bread photo and consisted of borek (cheese-filled pastries), falafel, calamari, sucuk (spicy sausages), and hellim (halloumi cheese). The falafel was average, the calamari had an onion rings vibe, and the borek felt like they were made in a factory. Not fancying a main I went straight to wild strawberry cheesecake (£2.75) photo. This felt like it had been frozen and defrosted for me. I suspect they are not making the starters and desserts themselves as much as cooking pre-processed food; as their prices are high-end for Camberwell, this isn't what you would come here for.

secretlondon went back in February 2010 to try the kebabs.

This time I had hellim to start photo, which was okay but not massively exciting. They gave me a grilled onion in sauce photo and a bowl of grilled flat bread photo which was lovely. The bread had charcoal from the grill and was actually the highlight of the meal! I don't mean that to knock the rest of the food, just that I could have eaten that bread all day. I had a mixed kebab as a main which was as you would expect, with salad and rice photo. The meat was nice — lamb chop, shish, chicken wings, etc. I finished off with a Turkish coffee — they do medium, sweet, and strong. I was conservative and went for medium photo. I spent £17 in total.

As of September 2010 they do a set lunch menu for £6, Monday-Friday until 5pm; this includes one course plus a glass of wine or a soft drink.