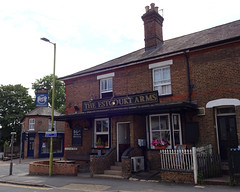 Pub in Watford. It was previously also known as Lynch's photo.

Despite its relatively small size, it has two separate rooms inside, with a small entrance lobby giving onto each and the bar in the centre offering service from either side. The smaller of the two is snug-like and has a dartboard and a small selection of board games, while the other, larger one has a flatscreen in one corner and banquettes and window seats around the edges. Decor is traditional, with burgundy velvet curtains hanging at the windows, a patterned carpet on the floor, and upholstered banquette seating. Further seating is provided by a patio-style beer garden out the back.

Kake first visited on a Wednesday afternoon in September 2009. There were about 8 or 9 people in when I arrived a little before 5pm, and the atmosphere was quite lively. The flatscreen was showing sport with the sound off, but not many people seemed to be watching it. Music was playing, but not very loudly, and it stopped a little later. On another visit in July 2017, there were three or four other customers inside when I arrived shortly after 2pm, and around the same number in the garden. Tennis was showing on the flatscreen with the sound on.

Real ales available in September 2009 were Black Sheep (£2.70/pint) and London Pride. The staff member who poured my pint left it to settle and topped it up as a matter of course, something you don't see often! In July 2017 the handpumps were clipped for Tring Side Pocket and Oakham Citra, and a pint of lime and soda was £1. Service was friendly and welcoming.

Food is served, though we're not sure what times. On Kake's September 2009 visit there were no menus out but there were a couple of specials written up above the bar; roast chicken and ham (£6), and bolognese with penne (£5.50).