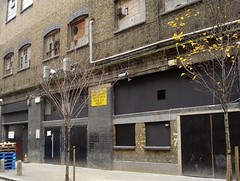 Electrowerkz is a (minimally) converted industrial building near Angel Station which is an indoor paintballing venue by day, and a nightclub at night.

Paintball games are bookable in advance, and they'll supply you with all the kit you need, including guns, ammo, overalls, masks, and a safety training session. The arena is incredibly atmospheric, composed of many rooms and twisty passages and staircases spread over four floors of industrial decay. The games range from team games played over the whole area to fast and brief one-on-one duels.

Other than the briefing/refreshment area, the nightclub part of Electrowerkz is separate from the paintballing part, but it retains the warehousey feel. There are three main rooms: sometimes they're all used by one event, but it's not uncommon for two or three separate events to be running on a given evening. Bar staff and security are extremely friendly.

The top and middle floors have quite a bit of seating available without really getting in the way of the dance area. They've also got cages for, uh, dancing in, and a very large number of UV striplamps around the walls. Vodka is £2.50, a can of Red Bull is £2.50; the bars also serve cans of beer, crisps, chocolate, lucozade, and coffee. There's a pool table lurking around somewhere: it was on the middle floor last time we saw it, but it moves around quite a bit. We've got no idea why there's a washing machine there, either. It has been alleged that the toilets are in fact technically gender-segregated, but nobody ever seems to pay attention to this.

Going to a club night at Electrowerkz can feel a lot like going to a dodgy squat party in a warehouse, except that it's a legal venue, licensed until 5am, and the soundsystem is nowhere near as good. It's a dive, but we love it dearly.

Electrowerkz is the home of Slimelight, allegedly the longest-running goth club in the world. It's also currently the rather authentic venue for the rave revival night Bang Face. You can find an events listing at the Slimelight website.