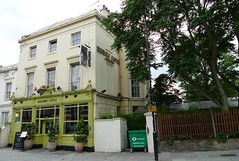 A large but popular pub on the Regent's Park side of Camden Town.

One of the Castle Mitchells & Butlers pubs, it's been given a refurbishment to push it towards the gastro end of the market, and the menu features familiar favourites, as well as sharing plates. There's a kitchen counter at the back of the bar where you can see the orders being prepared. Food is served noon-10pm daily (until 9:30pm on Sunday).

On handpump are London Pride and another beer (it's been Landlord or Deuchars IPA on previous visits), as well as Weston's Vintage Cider. On an August 2008 visit, the other draught beers were Franziskaner, Hoegaarden, Leffe, Peroni, Staropramen, Kuppers Kolsch, Applebocq, Addlestones, Bulmers and Fruli.

There's a large beer garden with plenty of seating, including covered booth areas, such that on a Bank Holiday in August 2008 our group of over 20 had no trouble finding space. On a Saturday evening the following summer, the place filled up very quickly despite its size, though we were able to get a couple of tables inside. However, the queues at the bar were extensive, and by dusk the place was completely packed with drinkers.