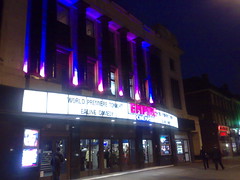 The Ealing Empire used to be a cinema in Ealing, surprisingly enough. It closed in late 2008, and was later demolished apart from the facade. As of August 2011, Empire's plans to rebuild it are yet to be realised; see Ealing But Happier for more. There is also a petition to get things moving.

It is a converted theatre with three screens - two smaller ones with quite flat seating (but still good views) downstairs and one larger screen upstairs, with banked seating. Sound and picture quality is quite good, but not outstanding.

They have a small concession stand and a pick and mix section.

Prices (as of February 2006) are £6.00 for a normal ticket and £4.40 before midday. They often start showings of popular films before midday at weekends, giving a cheaper and less crowded way of seeing recent releases.