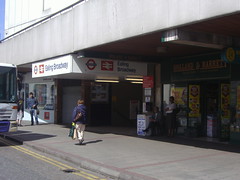 Tube and rail station in zone 3. It's a terminus for both the District Line and the Central Line as well as a major stop on the various lines going west from Paddington Station. All eastbound mainline trains from this station terminate at Paddington, with a few of them stopping at Acton Mainline Station before that. The station is served by both Great Western Railway and TfL Rail.

It is a national rail station and the ticket counter sells tickets for mainline trains as well as (in a lesser capacity) the London Underground. There is a machine to top up Oyster cards but they don't do this at the counter.

In the station there is a branch of WH Smith and a sandwich shop.