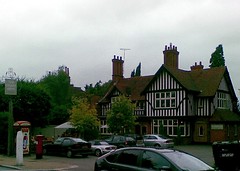 The Dysart Arms was a gastropub in Petersham, on the outskirts of Richmond. It has since been converted into a restaurant called the Dysart Petersham.

Pub in Petersham, on the outskirts of Richmond.

This is very much a gastropub — as you arrive you are asked if you are eating or just having drinks, and all the internal tables are laid out for diners. On one side there are even tablecloths.

bob visited on a Saturday afternoon in August 2009. I was part of a pre-booked group of ten, but there were plenty of spare tables inside and out at 2pm. This may have been partly due to the weather; I suspect in nicer weather this is much more of a destination, and the garden at least would be full.

They had two real ales on, Twickenham Fine Ales Summer Gold and Meantime LPA (both £3.15). They were both very drinkable.

Lunch is served noon-3pm. Although last orders are normally at 3pm, they very kindly let some of our party order after that since they were running late. The menu seemingly changes daily and is updated on the website.

bob started with the linguine with braised octopus, chilli, olives, and parsley (£6.50). The pasta was fine. The chilli wasn't noticable to me, but then I do have a high chilli tolerance. The octopus however was fantastic; not chewy at all, and in fact almost melt in the mouth. For my main I had crisp pork belly with roast fennel, Puy lentils, and chilli jam (£13.50). The pork belly was fine; the outside nicely crisp and the inside just about right, not too dry and not too moist. The crackling could have been a bit more crisp though. Ed and Thomas seemed to enjoy their steaks (£16.65), and the beer battered haddock with hand cut chips (£14.75) looked really good as well.

They also have live music. The internet suggests this is mostly jazz and classical.

Accessibility: No steps to get in. There are a few raised areas. Access to beer garden, bar, and toilets is all on the level. The cubicle in the male toilets is fitted out as a disabled toilet with baby changing facilities. Both male and female toilets have doors wide enough for a wheelchair, so I suspect at least one of the female cubicles is also fitted out for disabled access.