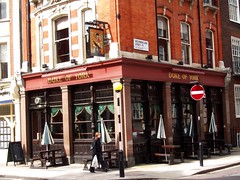 Previously a Sam Smith's pub just off Marylebone High Street, this is now more of a tapas restaurant than a bar, called The Fat Of The Land.

Consists of a large room with a number of partitioned booths lined against the street-facing walls, with a bar at the back of room. There are tables outside along both sides of the pub (New Cavendish Street and Westmoreland Street).

A large group visited on a Saturday and found the place largely empty in the afternoon, though it filled up a little later in the evening. The place was able to accommodate our group quite well, and, unlike its sister pub the Dover Castle a few streets away, tolerates the presence of young children.

There's no ale on handpump at this Sam Smith's, but it otherwise has the usual range.