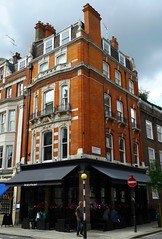 Tapas bar and restaurant in Marylebone, closed in August 2014. Hoardings on the building suggest a new establishment called 'The Cavendish' is due to open in September 2014. The information below is retained for historical interest.

It opened in 2012, replacing the Duke of York pub. Its website indicates it specialises in Catalonian food.

Inside, the traditional pub fittings of the old Sam Smith's pub have completely gone, and it's been transformed into a bright, light room with black tables around the edge of the space and a large bar in the middle, with stools along it photo. The prominent staircase suggests there is an upstairs space as well, though we didn't check this. There are also tables outside on both sides (as pictured above).

There's not much left of the old pub on the bar either, with one handpull for ale (dispensing Pedigree), and three taps for draught Mahou, San Miguel and Guinness. The wine list is far more the focus for drinking, with some pleasant wines available.

The menu is divided into short sections for salads, meats, fish and the like photo of menu, June 2012. On Ewan's June 2012 visit, the white asparagus with citrus mayonnaise and truffle oil (£6.50) photo was fine. More substantial was the pan-fried chorizo and smoked morcilla on a bed of soft polenta (£8) photo, which was very tasty and the polenta just the right consistency. Best was a main of aubergine, potato and beef moussaka (£10.50) photo, a hearty concoction topped with cheese and perhaps a little difficult to share, but excellent.

Service was fine, with a jug of tap water provided with no problems, and if the place was empty downstairs at 1pm on a Friday, it did eventually fill up nicely. Tables are quite tightly packed in.

Accessibility: No step to get in. Toilets are located downstairs, plus an accessible toilet on the ground floor.