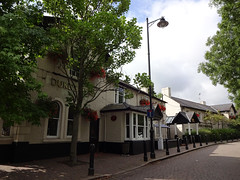 Young's pub and hotel in Wallington.

A refurbishment in 2012 saw the removal of interior partitions as well as various other decor changes and rearrangements (see old version of this page for a pre-refurb description). However, the drinking area at the front still has a traditional feel, with wood panelled walls, a hardwood floor, patterned rugs, and a U-shaped bar with a total of ten handpumps in two banks. Lighting is dim, and the ambience is cosy.

A corridor leads to the hotel space to one side, and further in is a lighter, brighter dining area set with cutlery and glasses. Decor in the dining area is a mishmash of different upholstery fabrics, paint colours, and furniture — all, no doubt, carefully designed at head office despite the appearance of being thrown together from leftovers. This area looks onto the beer garden, which is part-paved and part-astroturfed and has three non-smoking "beach huts" at one end.

Kake and bob first visited pre-refurb, on a Monday early evening in August 2011. There were three real ales on, all Young's: London Gold (£3.15/pint), Special (£3.20/pint), and Ordinary. No music was playing. There was a flatscreen showing cricket with the sound on, and a handful of people in watching (and discussing) it. The atmosphere was quite friendly, with a couple of people making remarks to bob about the cricket (which he was watching while Kake sat in the beer garden).

Kake visited again on a Monday morning in August 2018. I was here for breakfast, not beer, but I did note the handpumps were clipped for Dorking Washington Gold and Weston's Rosie's Pig as well as the to-be-expected Young's Special and Ordinary. There were a couple of other people in for breakfast when I arrived around 8:45am, and music was playing, not too loud.

Their breakfast menu photo has no prices on, and they were reluctant to tell me the prices of the individual items because they wanted me to order the all-in deal instead. This deal costs £11.50 and gives you access to the continental buffet of toast, croissants, hot drinks, juices, yogurts, and fruit plus one cooked item. I chose eggs florentine for my cooked item and also had a glass of decent enough orange juice and a pot of generic tea.

The eggs florentine photo were almost great, but marred by a slight grittiness in the spinach. The yolks were both runny, the muffin was decent quality, and aside from the grittiness the spinach was competently prepared and plentiful. The hollandaise was nicely vinegary without being harsh, and I wished there had been a bit more of it.

According to their website as of August 2018, there's a pub quiz every Monday. They have WiFi, which is free but requires registration.

Accessibility: Step-free to get in, and it's almost all on one level once you're in; the only exception is steps to one small seating area which forms a very small proportion of the overall seating. It's step-free to the toilets, including a RADAR-locked accessible one. Step-free to most or possibly all of the beer garden; there may be steps to the "beach huts".