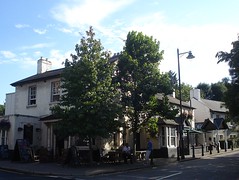 Young's pub and hotel in Wallington.

It has a few different areas inside, including a snug that has its own entrance and isn't connected to the rest of the pub internally. A dining room towards the back, set with cutlery and wine glasses, gives access to the function room and the beer garden. It's fairly dimly lit in the drinking areas towards the front, where ceramic jugs and pots hang from the exposed ceiling beams, but the dining area has a large skylight which admits enough sunlight to allow for a couple of hanging baskets. The beer garden is paved, with sturdy wooden furniture and a few plants in pots.

Kake and bob visited on a Monday early evening in August 2011. There were three real ales on, all Young's: London Gold (£3.15/pint), Special (£3.20/pint), and Ordinary. No music was playing. There was a flatscreen showing cricket with the sound on, and a handful of people in watching (and discussing) it. The atmosphere was quite friendly, with a couple of people making remarks to bob about the cricket (which he was watching while Kake sat in the beer garden).

According to a board seen outside in August 2011, quiz night is Sunday.

Accessibility: Step-free to get in, and it's on one level once you're in, including to the toilets and beer garden.