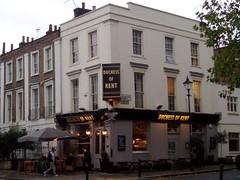 The front part is for drinking, while the larger back part is clearly intended for dining, with tables laid with napkins and cutlery. There's a sofa at the front, and an open fire which may be real. Decor is stripped wood, paintings on the walls, burgundy upholstery. There's also covered, heated seating out the front.

Kake visited on a Thursday early evening in April 2009. The seating out the front was well-populated, and there were only a few people inside, with the dining area at the back completely deserted (it was before the food-serving time though). The TV was on, but the sound was off. Some sort of chillout music was playing, not very loud.

The only ale available was Batemans XXXB; two others (one was Sharps Cornish Coaster) had just gone off. I had Aspall's cider instead (£1.75/half).

As well as the proper food served at lunch and dinner, they have scotch eggs and pork pies in a display case behind the bar, at £2.50 each as of April 2009. They also have chilli peanuts (£1.20); I tried some of these but unfortunately they weren't very good, with the flavour of plain boiled peanuts overlaid with chilli heat (but no chilli flavour). I took them back and replaced them with a packet of Frazzles (£1), which the barmaid kindly didn't charge me for. Other exciting snack options included Quavers and Monster Munch.

According to the Fancyapint review linked below, as of September 2011 there's a quiz on Mondays.

Accessibility: I think there was a step up to get in. However there was definitely a RADAR-locked accessible toilet.