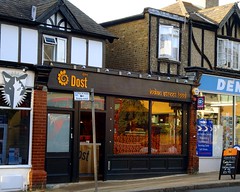 Dost was an Indian restaurant in Uxbridge, specialising in Indian street food. It has now closed. According to Google Street View, as of June 2014 the premises are occupied by a branch of Creams ice cream cafe.

Indian restaurant in Uxbridge, specialising in Indian street food. It opened in July 2012 as part of the Spice Merchant group. It also does takeaway, and offers online ordering via its website.

The interior is very colourful, with Bollywood posters on the walls and plastic stools of various hues grouped around a high communal table. Other seating is provided by black upright chairs with hard-edged upward-curved seats (rather uncomfortable unless you happen to have narrow hips), along with much more comfortable banquettes.

Kake and bob visited on a Saturday early evening in September 2012. We were the only customers when we arrived a little after 6pm, though another two turned up around 7pm.

Pani puri (£3.50 for five) photo weren't bad; the puri were thin and crisp and just the right size, but a little more sourness in the pani would have been welcome. Papri chat (£3.50) photo was perhaps a little too sweet, though the combination of textures was just right, the crisp papri and sev contrasting nicely with the smooth yoghurt.

Spicy squid (£5) photo was good; the batter was neither soggy nor greasy, and the squid rings were cooked just right. Anari lamb chops (£10) photo were well-spiced, and cooked just enough to crisp the fat without becoming dry.

Pau bhaji (£4) photo consisted of a smooth, spicy mashed vegetable curry topped with chopped raw onions and served with a halved, toasted, buttered bread roll. The bread was rich, soft, and more dense than fluffy — in a good way. This wasn't something we'd tried before, so it was hard to make comparisons with versions elsewhere, but as a thing in itself it was quite enjoyable.

Dal maa dumpukht (£4) photo was a slow-cooked dish of small whole black lentils in a creamy sauce; textures and flavours here were both very good, and Kake would not have been at all unhappy with a meal consisting of just this and rice.

Bullet naan (£2) photo was liberally encrusted with chillies; bob, as a chilli-head, found it quite enjoyable. Basmatic rice (£3) was an unexpectedly small portion for the price, but was well-executed, with each grain nicely separate, and soft without being soggy.

Service was slightly over-hovery, and a little young-and-nervous-seeming in some quarters, though this could have partly been because they saw us taking photos of the food. They also had that annoying-to-some practice of insisting on "explaining" the menu before giving you a proper chance to look at it; it would perhaps be preferable to be available for questions without pushing the restaurant's concept so heavily. Overall though it was fine; these are minor niggles which didn't affect the experience too badly.

Kake's verdict: I enjoyed the meal because I really enjoy this style of food. It's not the best of its type I've had in London, but I was pleased to find it so unexpectedly in Uxbridge, a place not otherwise known for good food. I would happily come back if I was in the area.

Accessibility: No steps to get in, and no steps inside. Some of the seating is on high stools. The ladies' cubicle was a little narrow, particularly as the sink is in there as well. There was a larger-looking unisex cubicle which may have had accessibility features, but we didn't get a chance to look in there.