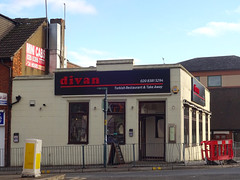 Turkish restaurant in Borehamwood. They also do takeaway.

It's long and narrow, stretching back from the corner entrance. A bar runs along the side wall as you enter, part occupied by the grill, part by bar stools which seem to be more for people waiting for takeaway than for people eating in.

There's seating for around 40 people on comfortable red and cream pleather, arranged around tables covered with white linen tablecloths. Napkins are similarly white linen. The cream-painted walls are hung with abstract art, and attractive stamped-metal lampshades dangle from the ceiling.

Kake visited on a Thursday lunchtime in November 2017. There were no other customers when I arrived shortly before 12:30pm, but a dozen others arrived while I was there, and a large office party was just starting to trickle in when I left around 1:15pm. Chill-out music was playing, not too loud.

I went for their lunch deal, which gets you two courses for £8. I chose sucuk izgara (spicy sausages) and mixed mezze, and asked for both my courses to come at the same time, which they had no problem with photo.

The sucuk were juicy and well-flavoured, and had a good texture with enough chew to be interesting but no gristly bits. The mezze was a good mix of flavours and textures; the highlights of this were the nicely refreshing antep ezmesi (a finely-diced salad of tomato, red peppers, onions, and parsley) and the saksuka (fried aubergine cubes with tomato and green peppers), which had just the right amount of salt and oil and the aubergines were cooked just right. The hummus had a strong flavour of tahini, which I liked but wouldn't suit everyone. The accompanying bread was OK, but seemed to be reheated rather than cooked fresh, and went chewy quite quickly.

Fresh mint tea (£2) arrived with plenty of mint leaves, all properly taken off the stems. A small saucer of Turkish delight photo was brought at the end of my meal, and didn't appear on the bill; it was nothing special though, over-gelatinous and very sweet.

Service was fast and observant even though there was only one person doing front of house. No service charge was added to the bill.

Accessibility: No steps to get in, and step-free throughout. The ladies' toilet doubles as an accessible one, with grab bars and low sink but no alarm cord.