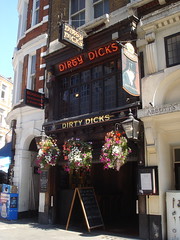 Young's pub across the road from Liverpool Street Station. Despite the opening hours given on the Young's website, according to Billy it's not always open at the weekend.

It's spread over three floors and is quite a bit bigger than it seems at first. There are bars on each floor, and the basement can be booked. Not all the floors are open at all times, though; on a Friday afternoon visit in August 2011, Kake was told that they wouldn't be opening the upstairs until 5pm.

The ground floor seating is almost all on high chairs and stools, with only one normal-height table.

The beer is certainly drinkable, and they serve the standard Young's ales on tap as well as the occasional guest beer. They also have most Young's bottled beers and a standard selection of lagers. Special was about £3/pint in May 2007, and St Austell Tribute was £1.65/half in September 2008.

Kake first visited on a Sunday afternoon in September 2008, having just missed a half-hourly train across the road. I had a half of the aforementioned St Austell Tribute, which was fresh-tasting and served at an appropriate temperature. The place wasn't crowded, and the normal-height table was free so I had no trouble finding somewhere to sit, but there was a nice buzz of conversation. Music was playing, but it wasn't excessively loud. Service was very friendly.

On a later visit, on a Friday afternoon in August 2011, it was busier and there was nowhere to sit except on the high stools.

According to the Young's website as of August 2011, food is served noon-9:30pm Monday to Saturday and noon-8pm Sunday. See photo of the menu from September 2014.

Sunday food details noted on a September 2008 visit: Sunday roasts all £10, choice of beef, pork, or chicken, all with veg, new potatoes, roast potatoes, and Yorkshire pudding (or sage and onion stuffing for the chicken). Their "weekend menu" was also available, with starters between £4.25 (soup of the day with bread) and £6 (salt and pepper squid with citrus mayo) and mains between £8 (caesar salad) and £10 (e.g. fish and chips). Vegetarian mains were the caesar salad and the homemade bean casserole with goat's cheese and garlic bread (£9).

Accessibility: Step-free access to get in, to get to the bar, and to get to the toilets — but there's only one normal table in the ground-floor bar, with the rest of the seating being tall stools at tall tables.