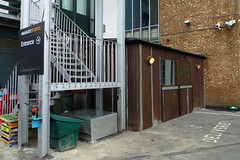 Dirty Burger was a burger shack (in the literal sense) in Kentish Town. It closed down in July 2017, though other branches remained open.

A burger shack (in the literal sense) set behind a Pizza East restaurant in Kentish Town, and run by the same people (Soho House).

For all its corrugated-iron pseudo-"pop-up restaurant" style, this small space is comfortable enough inside, though it gets a bit drafty and cold in winter. There are cushioned and backed bar stools secured to the ground around a large rectangular central table (at regular height), as well as taller seating at a ledge running around the sides of the building. A queue forms at the counter by the door, the length of which depends on when you're visiting, though it's open very late at nights (and very early in the mornings, though burgers are only served from 11am). On a Sunday evening before a bank holiday, the queues weren't too long at 9pm, and turnaround on the seats was good (as the meals aren't very large, and quickly consumed).

The menu is extremely limited: only one choice of burger (cheeseburger, £5.50) and two of fries (crinkle-cut or onion, £2.50, the latter a version of onion rings). On Ewan and Kerry's visit, the burger was tasty, if greasy and rather falling apart inside a soft brioche bun. Meat was cooked on the pink side of medium. Crinkle-cut fries were excellent, as were the onion fries (though they were dominated by the greasy but crispy batter).

In the mornings until 11am they offer a "DirtyBreakfast", either sausage & egg or bacon & egg (both £3.50) with unlimited tea or filter coffee thrown in, which you can serve yourself from the facilities at the side of the dining area. Ewan tried the bacon & egg photo, which featured a carefully shaped roundel of egg (not runny) and a vast quantity of good-quality salty bacon, rather dwarfing the burger bun around it. Needless to say, it was rather messy to eat, and the accompanying small pile of napkins got used up (as did the small sink set in the sideboard next to the coffee machine).