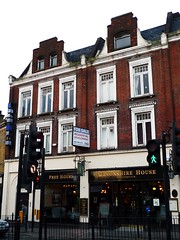 The Devonshire house was a Wetherspoon's pub in Crouch End. According to the Jun/Jul 2016 London Drinker, it closed in May 2016 and is due to become a shop.

A Wetherspoon's pub in Crouch End, which used to be an All Bar One, and opened in 2010.

Despite the low-ceilinged shop-conversion layout, it's noticeably more upmarket than your usual Wetherspoons, with fleur-de-lis upholstery on the chairs and chandelier-style lighting. Large windows at the front lead back past a long bar to a seating area at the back. Booths line the walls with smaller tables on the carpeted floor.

There's a wide range of good value beers and wines, with the usual emphasis on the cask ales. There are ten handpulls, in two blocks of five, with a number of Fuller's-owned ales (Front Row, HSB and Seafarer's Ale on Ewan's February 2011 visit) amongst others. On Kake's August 2013 visit, a pint of lime and soda was 50p.

Ewan's verdict: Service was friendly and professional. A perfectly pleasant place for a drink.

Accessibility: No steps to get in, and it's step-free to the bar, some of the seating, and the RADAR-locked accessible toilet. Around half of the seating (and the ladies' and gents' toilets) is up two steps at the back.