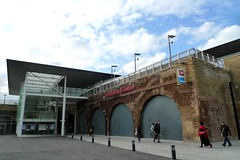 It's served by Southeastern trains inward to Cannon Street or Charing Cross via London Bridge, and outward to Dartford or Slade Green.

It's also on the Thameslink route via Dartford.

It was refurbished in 2012; see Deptford Dame writeup and followup. It now has step-free access to both platforms via lifts.