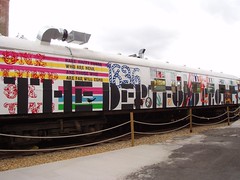 The Deptford Project was a cafe in a converted train carriage on the High Street in Deptford. It has now closed. The information below is retained for historical purposes.

Cafe in a converted train carriage on the High Street in Deptford.

The train sits in a yard next to Deptford Station. There's a large outdoor seating area alongside, with umbrellas for shade. Inside the train is colourful, light and airy. The original layout had tables running in a long line down the length of the carriage photo, but according to the Deptford Dame as of May 2009 there's a new layout which makes it easier to move around inside, as well as a neat little sofa/coffee table nook at the far end. The front of the train is taken up by the kitchen photo. Staff are friendly and helpful.

The menu itself sticks to basic food, but done well. There's a range of sandwiches, some very tempting looking cakes, and cooked breakfasts available, all at very reasonable prices. In August 2008, Ewan's very tasty vegetarian breakfast came in at just under £4 and included chunky toast and a vegetarian sausage, as well as all the usual suspects photo.

Accessibility: There are about 15 steps up to the cafe itself, which is mounted on a platform. There's a ramp that goes around it too.