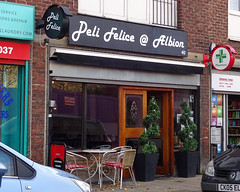 Italian cafe, deli, and sandwich shop near Rotherhithe Station. It opened in July 2008.

It seats just 16 people, though the tables and chairs aren't crowded in at all. There are large windows at the front to let in the sunlight, and the airy feel is enhanced by white walls and terracotta-tiled floor. It also hosts a frequently-changing exhibition of works by local artists, and according to an article in the Spring 2009 South Bermondsey Partnership newsletter, the cafe owners don't take any commission from works sold.

For eat-in, order at the counter, and your food/drinks will be brought to your table. Pay when you order or when you leave, up to you. The menu photo 1, photo 2 is based around made-to-order sandwiches (up to three fillings for £3.20, as of November 2017), pastries, salads, and a couple of pasta dishes. The meats, cheeses, and other items from the deli counter are available by weight, to take away, and there are also shelves with a small selection of Italian groceries such as pasta, olive oil, and pasta sauces.

Kake has visited a couple of times now, most recently in November 2017. Service has always been helpful and friendly, and on all my visits (mostly mid-afternoon on a weekday, but also once for a weekday breakfast) there have been several other customers in, including some who seemed to be regulars. Music is usually playing, not too loud, often instrumental jazz or the like.

A pastry in March 2010 was fine. A sandwich in April 2011 was also fine, with plenty of wafer-thin provolone, some decent prosciutto cotto, and a generous helping of artichoke hearts. The bread (brown bap) was a bit dry, but perhaps I should have chosen one of the others on offer (ciabatta, focaccia, etc).

In November 2017, a ciabatta with prosciutto crudo, provolone, and grilled vegetables (£3.20) photo was pretty tasty, though I'd have preferred more vegetables (I'd ask for a double serving next time). It was heated in a panini press and came scattered with dried oregano, which I sometimes disapprove of but which worked well in this context.

They have WiFi — ask the staff for the name of the network.

Accessibility: Steepish but very short slope at the entrance (looks like a smoothed-over step). Once you're in, there's a small step (around 2 inches) and a corner to negotiate to get to the loo (single cubicle, not huge but not tiny either).