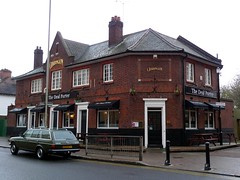 The Deal Porter was a bar/gastropub in Rotherhithe, but has now closed. As of May 2010, the site was occupied by another gastropub called The Compass. As of June 2013, the South-East London CAMRA mailing list reports that it's now called Pizza Lounge but still does real ale and it's still fine to pop in for just a pint.

The information below is retained for people who want to know what it used to be like as the Deal Porter.

The interior is decorated in white and black and red, with chandelier-style lighting draped with strings of black paste jewels. The bottles displayed behind the bar are backlight with red lights, and the overall effect is perhaps a little overwhelming.

Several leather sofas are arranged in squares near the bar, while upright dining tables and chairs fill the rest of the space. There's a flatscreen, but it's mounted on one side of the large pillar that bisects the sofa area, so it's only visible from one corner of the pub and doesn't intrude on the rest of the room.

Kake visited on a Wednesday evening in October 2008. There were no other customers when I arrived, but a group arrived later on. The barman was very eager to please; he mentioned later that it was only his second day. Young persons' dancing music was playing on the sound system, though it was the more chilled-out kind rather than, say, gabba. This was turned off later in favour of the football; I suspect this was by request of the group who were watching the flatscreen.

They have no handpumps, and although they have a Leffe tap, they actually only had Leffe in bottles. Other beers advertised as being on tap were Staropramen and Hoegaarden. I went for Bulmer's pear cider (£4/pint bottle).

I also wanted to try the food. I had the steak, which cost £12 including chips and a side salad of rocket, and I also added pink peppercorn sauce at £1.50 photo. The steak was fine, cooked rare as requested. The sauce was also fine. The chips, which are advertised as "the best this side of the river" were certainly contenders for that title; clearly hand-cut, and fried well. Certainly the price was very fair for this level of quality.

The full menu is viewable on their website. Starters are priced between £4 (soup of the day) and £7.50 (six rock oysters, though they didn't have any available on the day of my visit). Mains are also fairly reasonable, starting around £8 (rack of bourbon BBQ ribs) or £8.50 (grilled whole trout with lemon and thyme).

As a local, I'm in two minds over whether I'd come back - the decor is rather alarming, and the drink options are a little lacking, but then again they may have a decent wine list (I didn't check) and it's not as though the area is overburdened with decent food options.

Accessibility: I think there may have been a step to get in, but it's on one level once you're in, and there's an accessible toilet - this doubles as a ladies' (though there's a separate ladies' at the other end of the pub) so I can confirm that it was unlocked and in full working order.