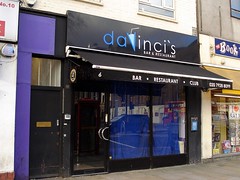 Da Vinci's was a late-night bar and restaurant near Waterloo Station and the Old Vic theatre. It has now closed, due to redevelopment of the block it used to be in.

A late-night bar and restaurant near Waterloo Station and the Old Vic theatre.

Note: LondonSE1 reports that there was a fire at the premises in early October 2014. We don't yet know how much damage was caused, so we don't know if Da Vinci's remains open or not. However, in any case, according to the same report, it will be closing for good within the next few months due to redevelopment of the block.

The area has a number of nice bars and restaurants, so the usual clientele of Da Vinci's only start showing up after 2am, in search of that missing round or a night cap. There is a bouncer at the door after midnight, and it gets pretty crowded sometimes, with a lot of smokers outside and people converging from the nearby pubs and bars.

There are some 10 odd tables, with a couple of them outside. It's fairly dark inside, but the music isn't that bad (80s, 90s and more recent stuff, varying between rock, pop and alternative, with the occasional cheese). The bar is located at the back of the place, with a basement bathroom.

In terms of beer and spirits, they don't serve pints, but rather bottled beers (easier to manage and faster for all-night places), and there is a range of whiskies, rum, gin (the usual suspects), with some soft drinks as well.

Suitable fall-back option when everything is closed.

The London-SE1 entry says it has free wireless.