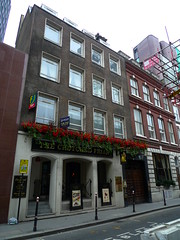 Pub in the City.

It used to be a Nicholson's pub, but according to the April/May 2011 edition of London Drinker, it was acquired by the Stonegate Pub Company in October 2010.

According to the 2011 Good Beer Guide, it has a patio garden.