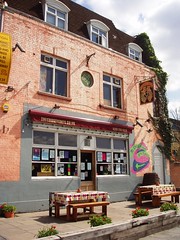 The Cross Kings was a friendly pub off York Way, just behind King's Cross Station. It closed in July 2010 and has since reopened as The Star of Kings.

The upstairs has a number of comfortable couches and large tables, and a seating area with a few tables out the front. The area behind the bar has more couches, though they often have gigs and club nights in this space in the evenings and close this area off (if admission is being charged). The booking policy is quite broad and encompasses mainstream pop nights, through R&B and folk, to experimental music and free jazz.

London Pride is always on pumps (both upstairs and downstairs), and in June-September 2008 the other ale was Hopback Summer Lightning. Draught lagers are Leffe, San Miguel, Red Stripe and Amstel. There's a decent wine list, with very drinkable house red (£3.85 for 175ml) and white wines. A pint of lemonade is only £1.

They also have a food menu, which has a number of vegetarian/vegan options on it. Ewan's aduki bean burgers (£6.50, June 2008) were served in a large bun on their own, but with sauces provided separately (including a peanut satay sauce) and salad on the side, and were quite tasty.