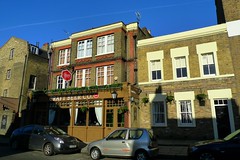 This was a branch of the Craft Beer Co chain of "craft beer" pubs, located in Pentonville not too far from Angel Station. As of late 2020, Beer Guide London reports that it has closed and will not be reopening, and this seems to be confirmed by its removal from the chain's website.