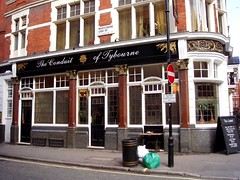 A refurbished gastropub and cocktail bar in Marylebone which replaced "The O'Conor Don", an Irish pub, and has itself now closed down.

The premises were under refurbishment as of December 2008, and later re-opened as The Coach Makers, a variant on the pub's original name.

The ground floor has been thoroughly overhauled, bringing into line with gastropub expectations, all ersatz regency style. Bare brick walls behind the bar, fussy golden patterned wallpaper behind a chaise longue and low table on one side of the room by the stairs photo, with tables filling the rest of the space. At an early-evening after-work time on a Wednesday, the area was already largely full.

There are no ales on pump, just lagers (Paulaner Muenchen, Bitburger, Peroni, Pilsner Urquell) and Guinness. Wines are available of course at a reasonable-for-the-area price (around £5 for a small glass of pinot grigio), though they advertise glasses of more high-end wine on a small chalkboard to the side of the bar (going for £7 for a small glass). The bar snacks are roasted beans (broad beans, I think), which are quite tasty.

Upstairs is a dining room, and the menu appears to emphasise meat, and particularly game (there were no vegetarian options listed). Downstairs is a cocktail bar area, though it wasn't open in the early evening.