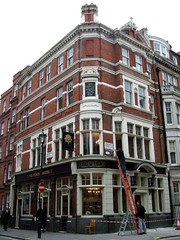 A stylish gastropub in trendy Marylebone.

The pub may have returned to its long-neglected original name, but it's scarcely likely to approximate the original Victorian ambience. The ground-floor bar space is open, bright and airy, with plenty of light coming through the windows. The more recherché decor extravagances of its former shortly-lived incarnation have gone, but it retains the bare wood floors and now has chunky wooden tables with matching seats, three smaller and three larger ones, as well as a couple of couches by an ornamental fireplace.

There's more room upstairs for dining, with plenty of tables and again lots of light streaming in from the open windows. A small bar serves the upstairs with a couple of handpulls, but at less busy times this isn't manned. Outside a small area for smokers is roped off.

The bar downstairs impresses by its newly-installed range of ales, a pleasing development. There are now four handpulls, dispensing Deuchars IPA (the regular, one presumes), as well as Theakston's Black Bull Bitter, Brakspear's Hooray Henley (£1.80/half), and Marston's Lord's Tavener's Ale (cricket-themed for the summer). There are also three casks arrayed alongside the bar dispensing two of these plus Jenning's Honey Bole photo, including menu chalkboard. Lager drinks are well served by a couple of basics, plus Birra Moretti, Edelweiss, and Marston's Oyster Stout, and for cider there's Bulmers on draught. They've also got a decent wine list, as you might expect for the area.

The food menu is prominently displayed on a chalkboard inside, as well as on all the tables and in a frame outside, and is very nicely constructed. For vegetarians, there's some really quite decent options and no reliance on familiar risottos or the like. A seasonal asparagus salad comes with oyster mushrooms and artichokes, resting on a bed of peppery fresh roquette leaves, and a small poached egg with hollandaise on the side (£7 as starter, £11 for a main) photo. It all works together nicely, top-quality ingredients justifying the priciness somewhat, and is served with a side of crusty white bread with olive oil and balsamic photo.

Presentation in general is one of the pub's strong points, as a fellow diner gets a pot of tea served on a tray with a delicate china cup, and Ewan's condiments are arranged neatly on a wooden board.

Service is friendly, still settling in perhaps, as the pub has been open only a couple of months. The downstairs gets a few other diners on a Tuesday lunchtime in June 2009, but there's still plenty of space, and even more upstairs, with no unnecessary crowding of tables.

There appears to still be a cocktail bar downstairs, as there was in its previous guise, which may be open in the evenings.

On a Thursday lunchtime visit in August 2012, Kat was a little disappointed with her burger (too large to bite into, fairly bland) and her pint of Deuchars was rather stale, but her colleague's smoked salmon salad was very enjoyable and the service was quick and professional. Despite the apparent wide selection, the ale quality has been suspect on a few occasions in the last year - I'd recommend going for bottled beer or wine instead.

Accessibility: A shallow step to get in, and toilets are located down some narrow stairs.