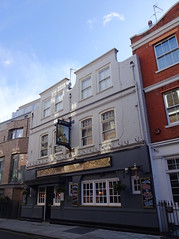 Although tucked off a side-street in a labyrinthine area of town, this place is still predictably popular with local office workers and political staffers after work on weekdays, the primary source of its clientele. Entry is into an area mostly taken up with high-table seating, though there are a few normal-height tables flanking a banquette along one wall. There are a few more larger tables up a few steps at the back, and then a large beer garden out the back (drinkers generally take up the entire alleyway, though only a small area has tables).

The bar has four handpulls for ale, with Courage Directors apparently a regular, though on a May 2009 visit, only two of them were on, offering Courage Directors and Young's Bitter. There were also the expected draught lagers, and a bit of a wait to get to the bar due to all the people crowding in.

Food is served off a standard menu, offering all the usual pub standards.