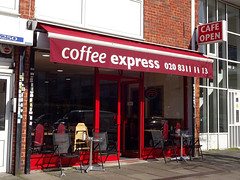 There's room for around 40 people inside at beige Formica-topped tables, and a couple more tables outside on the pavement. The decor is a step up from the standard greasy spoon, with half-panelled walls, hoop-backed padded chairs, something of a general "pale wood" theme going on, and a huge painting of a mountain lake on one wall. At the back is an open kitchen, separated from the seating by a service counter.

The menu is fairly standard — cooked breakfasts, roast lunches, omelettes, jacket potatoes, things with chips, sandwiches, and so on.

Kake visited on a Wednesday lunchtime in March 2017. There were five other customers when I arrived around 11:45am, and more turned up while I was there. Music was playing very quietly with videos on a flatscreen. There was, unfortunately, a pervasive smell of oil from the open kitchen.

It wasn't clear whether to order at the counter or not — there were menus out on the tables but the staff didn't seem in any hurry to come to my table. They did eventually come just as I'd decided to go up to the counter.

Ham panini (£3.70 including tomato, onion, and melted cheese) photo was a bit of a surprise. There were "grill marks" on the bread, but it was merely warmed, not actually toasted. The tomatoes were flavourless, though this isn't surprising for March. The ham was decent quality, whole slices rather than reformed. Overall, it was fine, if not quite what I'd expect from something advertised as a panini.

A cup of tea (80p) arrived "very weak" as requested, and they were careful to check I was happy with it.

Accessibility: A small step to get in; no more than an inch. Tables and chairs are fixed to the floor. There are reasonably wide aisles between the tables. No steps to the toilet (a single large cubicle), but there is a heavy door immediately followed by a 90 degree turn.