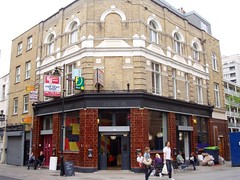 Now closed; was a coffee shop near the Barbican Centre in St Luke's. The entire Coffee@ chain went into administration around the start of 2009, and none of the branches survived.

As of October 2009, Krista reports that the premises are now occupied by another coffee shop, called Fix.

The information below is retained for people who want to know what it used to be like as Coffee@Whitecross Street.

A coffee shop near the Barbican Centre in St Luke's. It's part of a small chain, which has other branches on Bermondsey Street, Goswell Road, and Brick Lane (though the Goswell Road one at least may also have closed, and the Brick Lane one and Tower Bridge Road ones definitely have).

Inside it's a pleasant, buzzy environment, with a variety of tables and couches, as well as seats along the window. On a wintery visit around 6pm in November 2008, warm air was being circulated so it wasn't too cold, but both the front and side doors were kept open.

The coffee, however, is good quality and there's a decent selection of cakes and pastries. Ewan's almond tart had crumbly, flaky pastry, but a tasty gooey centre and was good value.

Coffee is served in cardboard cups (and food in boxes), even when you're staying in.