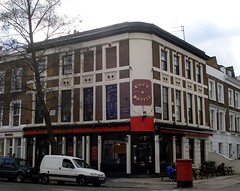 There are two rooms inside, and outside seating on the pavement too (some of it covered). The decor is old-fashioned but well-kept, with carpets on the floors and some banquette seating around the corner opposite the bar, as well as a couple of tables to the back in a dark little ante-room. In the second room are some large mirrors on the walls, with about 10 tables for seating, and an open fire (obviously not lit on Ewan's summer visit). Two screens show sport in the bar room.

Kake, Leon, and Andrea visited on a Friday evening in September 2008. On arrival at 6:15pm there were several people sitting outside and it was also quite lively inside, though there was no trouble finding a table. On Ewan's Saturday afternoon visit, it was busy but there were still seats including on the tables outside.

Service was friendly, and many of the other drinkers appeared to be regulars. According to Leon, this place is quite uncharacteristic of the pubs in the area, as the others are a bit more "upmarket".

There are three handpulls at the bar, with Hog's Back TEA (£3.20/pint), London Pride, and Harvey's Sussex Best -- all apparently regulars as they were unchanged on visits in September 2008, June and October 2009. There are also a range of the standard lagers on draught taps.

Apparently this place is on the CAMRA National Inventory, though Kake didn't really think it was very architecturally interesting overall.

According to the 2009 Good Beer Guide and the BITE comments linked below, as of 2008 it doesn't serve any food.