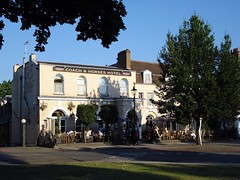 A Young's pub in Kew.

Despite being attached to a hotel, this pub does a pretty good job of fitting in between a straight hotel bar and a proper pub. There's a separate dining room area, and in the pub is a mixture of regular small tables, some couches, and some rather higher tables with stools.

The bar has four handpulls for real ale; on our November 2008 and July 2009 visits, these housed the expected Young's range: Ordinary, Special, and Bombardier (on the latter visit, there was a Kew Gold pump clip on the fourth pump, but on enquiring we found that this had run out). They also have a wine list, with a very tasty house red. Service on both visits was friendly and hospitable.

The menu stresses basic pub foods; there is additionally a specials board in the dining room. The 2007 Good Beer Guide advertised a special seafood menu on Tuesdays, but we don't know whether this is still the case.

On Ewan's November 2008 visit, the macaroni cheese (around £6) was simple but well-made, while the vegetarian lasagne was lovely, served on a very hot plate. The food was less impressive on Kake's July 2009 visit; despite being from the specials menu, the roast pork belly with crackling and black pudding (£12.45) was very disappointing, with hard/dry meat, chewy crackling, and a piece of food wrapping concealed among the black pudding. The black pudding and gravy were good, but not good enough to save the dish. Perhaps an off day, or perhaps they're just better at the vegetarian side of things.