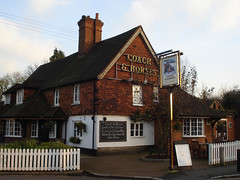 Before its acquisition by Stonegate, it was part of the Ember Inns chain, and it still bears a strong resemblance to the genre; indeed, the outdoor seating is still branded with the Ember Inns name. The interior has all the familiar Ember Inns characteristics, including striped upholstery, fake log features, and an interior divided into several cosy little tucked away areas. The ceiling is low in most areas of the pub, and "mind your head" signs warn of protruding beams. There's very little natural light inside, but the lighting levels are just about adequate to read a book.

Kake visited on a Thursday afternoon in November 2014. There were a fair few people in when I arrived a little after 3pm, and a good buzz of conversation. Music was playing, not too loud.

According to a menu seen on this visit, food is served until 10pm every day.

Accessibility: No steps to get in, just a small ridge at the threshold. Toilets are up a flight of stairs with a sturdy handrail on both sides. There may be an accessible toilet on the ground floor but we haven't confirmed this.