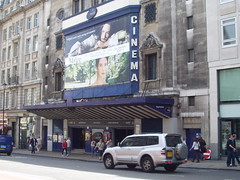 This is a rather older cinema than many of Cineworld's other London outlets, and it screens the more arthouse end of those films exhibited by Cineworld (as opposed to the more mainstream offerings of the nearby Cineworld Shaftesbury Avenue).

There are three screens, two of which are in the basement and one accessed via the grand staircases to either side of the lobby (though ticket holders must generally go up the one to the right). The main screen is far larger than the others, being in the proper grand tradition of the picture palace, with proscenium arch and seating both in front of and above the entranceways. Most seating is below the entrance level, with a steep rake in most of the seats ensuring that other spectator's heads aren't an issue. It's also possible to sit directly in front of the screen rather than having to crane one's neck up (although this would still be needed in the flatter first few rows of seating), making it a far more pleasant cinema to be in than the two subterranean ones. Of these, the second screen is at a rather odd angle, meaning that the left side of the seating is nearer the centre of the screen.

The main entrance lobby has glass doors on either side of a small snacks and popcorn counter. Two matched ticket booths are opposite the entrances, and these are usually manned, although at very off-peak times visitors may need to buy tickets from the snack booth. There is a small separate licensed bar area to the rear of the lobby, down a few steps, decked out in the somewhat garish colours of the chain.

The building is old without being decrepit, but the main auditorium is the one to try and see films in here.