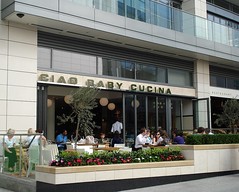 Ciao Baby Cucina was an Italian restaurant on the Lower Southern Terrace of the Westfield centre in Shepherd's Bush. It has now closed.

Italian restaurant on the Lower Southern Terrace of the Westfield centre in Shepherd's Bush.

James visited with a friend in late April 2009.

We were initially seated at quite a small table. Our orders were taken and we discovered their choice of sparkling water is the lovely San Pellegrino.

The rest of the meal arrived and the small table was unable to hold all of the food and drink. I complained and they moved us to a dirty table which they wiped the crumbs off. Our food narrowly fitted onto the table, yet it was intended for four and we hadn't over-ordered.

We each had the homemade lasagna, which was very tasty. We were offered parmesan, which had a hair in it. It was promptly replaced, having had a good scoop taken out of it. On the side we shared a garlic and cheese focaccia, which tasted deliciously garlicky, with the cheese adding a nice creaminess.

We finished off with cappucini, which were excellent. All in all, the food was good, the coffee was excellent and the service was thoroughly abominable.

We complained to the manager who snapped "Thank you gentlemen, it's on us" and headed off towards the kitchen very fast. The meal would have cost £39.40 + 12.5% service (which we were going to decline to pay).

The restaurant also lost the order for the table next to us and the manager offered them a salad to make up for it.