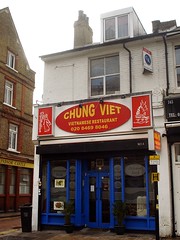 Now closed; was a small Vietnamese cafe/restaurant on Deptford High Street, just to the north of Deptford Station. As of October 2013, limster reports on Chowhound that it has closed down and been replaced by another restaurant.

(Chung Viet was closed down for hygiene violations in early 2011. We're not sure if it ever reopened after this; Google Street View from April 2012 shows the Chung Viet facade still in place, but the shutters are down.)

The decor is fairly basic, with cafe-style seating for about 30 people. A large mirror covered with fairy lights and plastic grapevines sits opposite a small fishtank, and a tiny water feature trickles in the window.

Kake paid a couple of visits in March 2010, once on a Saturday lunchtime (in the company of Sarah) and once on a Tuesday afternoon. There were very few or no other customers on either visit, though there were small gatherings of staff members both times, chatting away at a table. Pop music was playing quietly, nowhere near loud enough to interfere with conversation.

Lotus stem salad with chicken feet (nom ngo sen chan ga; £6) photo was OK; a fresh chilli flavour was evident, but overall it lacked zing. Fresh summer rolls with prawns (goi cuon tom; £5) photo were clearly freshly made, with nice, stretchy, soft wrappers. The prawns inside were fresh-tasting and not overcooked; the noodle percentage of the filling was quite high, though, and more herbs would have been nice.

Banh mi (£3) photo were quite small, though not too much so, given the cheap price. The bread was fine, served warm, and the pate was flavourful and had a great coarse texture; sadly, the usual lightly-pickled vegetables and chillies were absent, and the thick slices of cucumber and couple of sprigs of coriander weren't enough to perk it up.

Kake's verdict: I am a little bemused by the outpourings of love in the Chowhound thread linked below; although the things I've tried from here so far were all competent, they weren't what I'd consider exceptional. I'll come back to try more dishes though, partly out of curiosity and partly out of its being reasonably easy for me to get to.

Accessibility: Small ramp to get in. The (rather insalubrious) toilets are down a flight of stairs with a handrail only half of the way. Access to the stairs leading down is quite narrow.