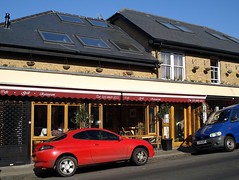 Chez Ecosium was a bar/cafe/restaurant in Brockley, fairly near the station. It closed in late 2008 and was replaced by a "bar and grill" called Aquarium — see Brockley Central review — which in turn has now closed. A new "bar and kitchen" called The Orchard opened on the site in December 2009.

The information below is retained for people who want to know what it used to be like as Chez Ecosium.

Bar/cafe/restaurant in Brockley, fairly near the station.

It's divided roughly into two parts. The front part is quite airy and open, and indeed they open the large front windows up in good weather; the view is not wildly inspiring, being of a side street lined with parked cars, but it's not unpleasant. There are also a couple of seats outside on the pavement. Moving further back, there are a few tables with a view of the open kitchen. The back part of the interior is a fairly dimly-lit room which is probably nicer in the evening.

There's a sofa at the front too, with a low table, presumably for people who just want drinks. The rest is your standard table/chair combinations; the tables are fairly small, but quite interesting, with wonky surfaces - handmade according to the Ecosium website. Various green plants too, and a fish tank (which I didn't actually notice, but which gets much attention according to the Brockley Central comments linked below).

Kake visited on a Wednesday afternoon in February 2008. The weather was lovely, so they had the front open, and I sat at one of the tables looking out onto the street. I was pretty much the only customer; it was a fairly odd hour though, around 3pm, so I wouldn't have expected it to be busy. I ordered the couscous with chicken (£9.50) and a lemonade (not home-made, just your generic clear fizz; £1.80). The couscous itself was good, nicely cooked and a good olive oil flavour, and the accompanying vegetable stew wasn't bad either (I particularly liked the whole roasted garlic cloves). The chicken, however, was very dry in parts, presumably due to its being reheated - it might be better at peak times. Nothing was even vaguely spicy-hot, though harissa was offered separately.

Service was friendly, if slightly nervous. There was background music, provided by some radio station or other, but it wasn't too loud. I'd come here again; I'd like to see what it's like in the evening. I don't think they do any cocktails or anything, but they do have a few wines, and the dips/nibbles look interesting.