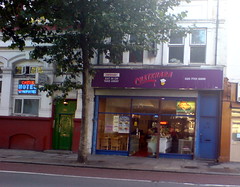 They have a selection of pre-prepared dishes which are heated up on demand, although the breads are sometimes made fresh.

secretlondon visited in August 2008, and had a kebab roll which came in a naan and was fine. Naans only cost 50p, and the food generally seemed to be cheap and edible.

secretlondon ate here on a Sunday afternoon in September 2008. She had chicken tikka masala, pilau rice photo a nan and sweet lassi photo. The food had been heated up on the plate as the plate was very hot and the sauce had gone dry in places. The nan was also cold.

The menu says there are two other branches in Clapham South and Tooting Bec.

Accessibility: Small step to enter and then a ramp. No idea if there are toilets.