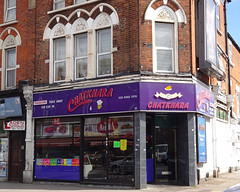 Indian takeaway and cafe on Upper Tooting Road, near Tooting Bec Station. It describes itself as selling "the finest Indian and Pakistani cuisines".

secretlondon has been to their branch in Elephant and Castle and had mixed experiences. I popped in to the Tooting branch to try it out.

This branch is the same as the one at the Elephant, with pre-prepared curries which are heated up for you. You can eat in or takeaway. I visited one Thursday evening in March 2016. I ordered a nan (£0.70) and a couple of kebabs: seekh kebab (£0.70) and shami kebab (£0.95, and which they'd run out of). The nan was freshly cooked from pre-made balls of dough but the kebab was clearly heated up.

I think I'll come back to try other things but I expect it is a variable as their Elephant branch.