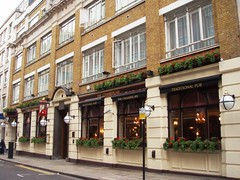 Fuller's pub and hotel near Aldgate.

The bar area is expansive, with freestanding small tables spaced widely across the varnished wooden floor. Sturdy high benches and tables stretch out into the room from the front wall next to the windows, and a dais in one corner offers more secluded seating, next to a curve of flocked wallpaper. Ornate mouldings and decorative vents adorn the ceiling.

The bar cuts across one corner of the room, with backlit wine bottles arranged behind it on each side of a large arched mirror. There are two banks of handpumps for a total of nine pumps; on our September 2013 visit these were all clipped for Fuller's ales: London Pride, ESB, Seafarers, and the seasonal Red Fox. They also had keg fonts for Honey Dew, Aspalls cider, Peroni, San Miguel, and others.

Kake visited on a Monday lunchtime in September 2013. There were already a fair few people in when I arrived a little before noon, and several more arrived while I was there, though there were always free tables. Clientele seemed to be a mix of walk-in custom and hotel guests; by the time I left, the room was filled with murmurs of conversation in several languages. Music was playing, not too loud. A pint of lime and soda was £1.15.

According to the Chamberlain website as of September 2013, food is served until 10pm every day. It's rather more elaborate than your usual pub food, perhaps because of the dual role as pub and hotel.

Kake tried the Loch Duart salmon, celeriac remoulade, sauteed samphire, vine tomato and black olive salsa (£12.50) photo. It was beautifully presented, with a crisp skin on the salmon, the salsa arranged around the edge of the plate, and microgreens scattered over the whole. The salmon itself was fine, and a generous portion. The samphire was somewhat underdone, though, and the celeriac could have been more finely-cut. The remoulade was also a little too sharp in combination with the salsa. However, it was very good for pub food, and the price was well worth it.

They have free wireless, and the code is on a board on the bar.

Kake's verdict: I'd like to come back and try out the quality of the beer — the food seems well above average for a pub, which is always a bonus for an evening's drinking.

Accessibility: Step-free access via a ramp (with slightly tight turns at ends). Step-free to the bar, the restaurant area, and some of the seating in the bar area. Much of the bar-area seating is on high tables with high benches. About half of the normal-height seating is up one step on a dais. The toilets (including an accessible one) are in the basement, down a flight of stairs with three bends and a sturdy rail on one side; there is a lift that goes down here too. Accessible toilet is usually locked in the evenings, with a bell next to it to summon a staff member with the key.