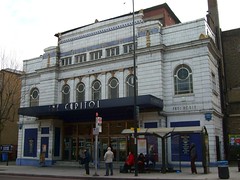 It's housed in a former cinema building, and this is still clear from the interior. Entry is into a small lobby with a few seats and a flight of stairs immediately up to more seating in a low-ceilinged area below the old cinema balcony. More stairs lead down to the main seating area and the bar. There's a smoking area to one side, rather too plain and concretey to really be describable as a beer garden.

The bar itself sports ten handpumps and stretches across the room where the cinema screen used to be. It still has an intricate moulded arch above, nicely lit and complemented by a surprisingly nice-looking backlit display of wine bottles. The balcony facing it is also still present, and has more interesting moulding; although you can't drink up there, according to the Good Beer Guide they will run tours by arrangement.

There were quite a few people in at 4:30pm, including several children who were having fun running around between the tables — there's plenty of space so this wasn't really a problem. No music was playing, nor was there any sound from TVs (not sure whether TVs were present but silent, or absent entirely).

Like many Wetherspoons, breakfast is served from 9am, and food is available all day.

Accessibility: Lots of steps, both to get in and to get around internally. There is an internal lift to get from the bar level to the seating level with the toilets, and there may be step-free access to here from the street if one goes through the "garden", but we haven't checked whether it's step-free all the way.