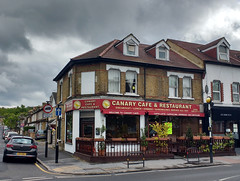 It seats around 50, at wood-effect formica-topped tables flanked by freestanding chairs.

bob visited on a Bank Holiday Monday in May 2017. There were two other tables of customers in when I arrived around noon.

I had set breakfast 4 with extra black pudding (£5.30 plus 80p for the black pudding) photo. The egg was runny enough, and the (deep-fried) mushrooms were fine. The chips were slightly undercooked. The beans were adequate, and the bacon and black pudding were OK. The sausages were standard greasy spoon ones.

Child-friendliness: There are at least two high chairs. They have a small children's menu consisting of various fried things (none of them vegetarian) with chips and beans.

Accessibility: No step to get in, and it's level inside to the toilets. The ladies' doubles as an accessible toilet, but is partly blocked by a table.