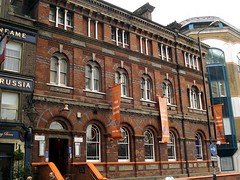 Restaurant in Whitechapel specialising in Parsi and Goan food, in the 2007 Good Curry Guide. They have a tasting menu.

They also do takeaway, but as of early 2014 they no longer offer delivery.

Kake and bob had a delivery in January 2009. It worked out quite expensive — £60 for the two of us, plus a £2.50 delivery fee, though we could have knocked a fiver off the total if we'd realised that the main courses automatically come with rice.

We started with the Cafe Spice platter for two (£13); this wasn't bad, and seemed reasonable value. It's worth noting that it doesn't have two pieces of everything, though this does mean there's a greater variety. Kake particularly liked the tandoori salmon.

Moving on to mains, beef curry a la Dada (£15.25 including rice) was all eaten by bob, so he'll have to comment on that. Cornish lamb cutlets Husseini (£16.75 including rice) weren't bad, but suffered from the takeaway process; they'd be better eaten in. Maa di daal (£5) was quite rich, as it should be; though Kake will get bob to order the tadka daal (£4.75) next time. Khara bheeda nay papeto (okra with potato, £5.25) was fine, and Kake would happily order it again. Rice (£2.25/portion, or free with a main course) was fine.

The packaging was annoying; rather than using recloseable and reusable tubs like every other restaurant in London, they use lidless tubs heat-sealed with sheets of thick clear plastic.

Kake's verdict: I'd be happy to try eat-in.

Accessibility: Half a dozen steps to get in; no lift. Bell at bottom of steps to ring for staff who will carry or assist mobility-impaired people into the building — see photo of notice explaining this. Accessible toilet available. Interior steps not yet checked.