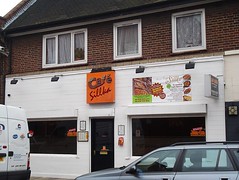 Cafe Sillka was a small Indian restaurant on Albion Street in Rotherhithe. According to Google Street View, by May 2012 it had closed down and been replaced by the Raj Tandoori.

Small Indian restaurant on Albion Street in Rotherhithe. They also do takeaway and delivery, and you can order online from Hungry House and from Just-Eat. According to a sign seen outside in March 2011, they have an all-you-can eat buffet on Sundays between noon and 5pm.

The interior is modern in style, and very orange photo.

Kake and doop visited on a Sunday evening in May 2008; there were a few other parties, meaning the place was about half-full, and a couple of people also came in for takeaways during the evening. Service was friendly enough, and efficient too.

We started with the Sillka combination photo for Kake and vegetable samosas for doop. The Sillka combination wasn't bad; the paneer in particular had a good texture and wasn't too bland. For mains we shared the seafood Sillka and, hm, was it vegetable pathia? along with pilau rice for two and a peshwari naan. The seafood Sillka was offputtingly sweet, and I could have sworn I found a glace cherry in it. We also had a bottle of Shiraz.

They were happy to bring us glasses of tap water, but the water had an unpleasant chemical taste; maybe they need to run the tap a bit longer before filling the glasses, or maybe they'd left it sitting out in a pitcher.